The commemoration of the bombing raid

THE BOMBING RAID ON LA GARRIGA 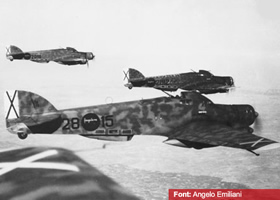 On 29th January 1919, just before 3pm, La Garriga was bombed by the Italian Fascist air force at the command of Franco. Two squadrons of Savoia S-79 aircraft unleashed their bombs on the town effecting numerous sites, streets and houses and taking the lives of at least fifteen people. The memory of the tragic raid was censored during the Francoist dictatorship.

Many years after the raid, the Council’s Heritage Department began to organize commemorative acts which, as well as remembering and bringing to light the events of the tragedy, seek to encourage people to reflect on them, recover aspects of our heritage related to the conflict and bring them to public attention and honour the memory of the victims and their families and of all those who suffered in the bombing raid. The activities aim to attract a high degree of involvement from the town’s people.

In short, in order to try and assure that such events could never again take place, neither here nor elsewhere, we hold firm to our motto: memòria per la pau (memory for peace).